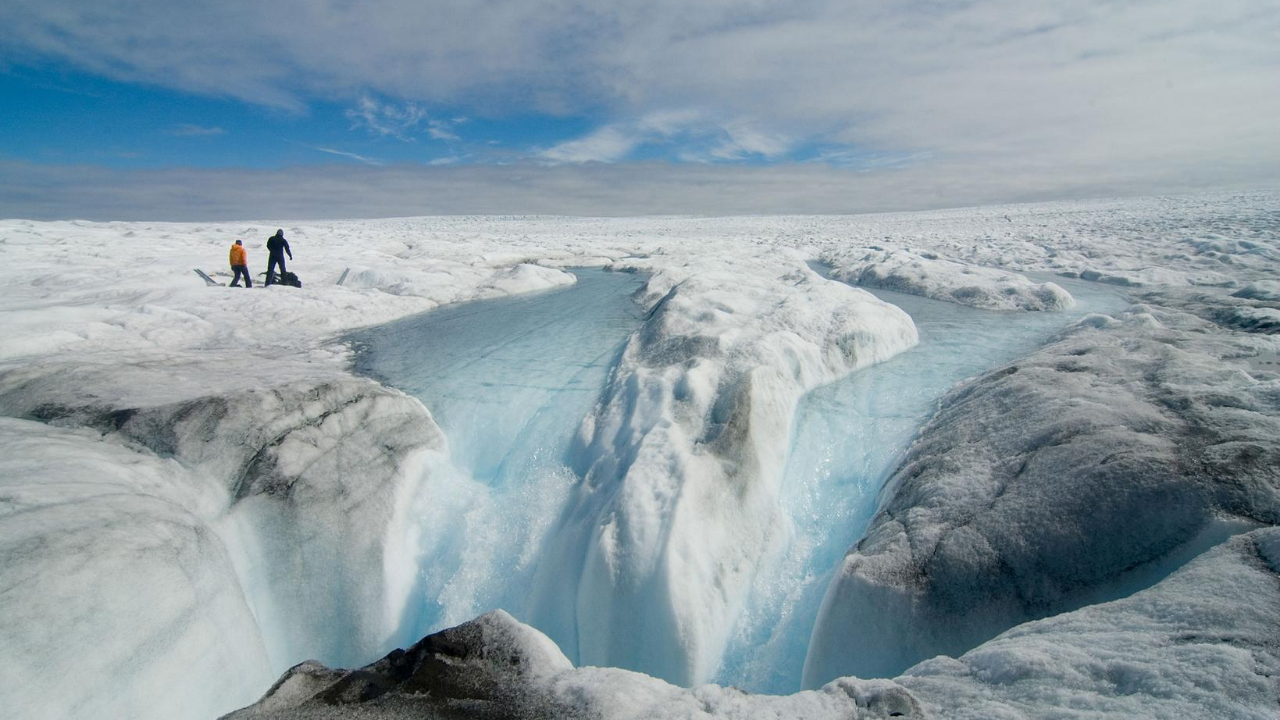 Now that doesn’t sound like ‘changing the world as we know it’-type news, does it? But it just could be.

The Greenland ice sheet is over 3 km high at its thickest point, and contains some 2,850,000 cubic kilometres of ice. Were it all to melt, global sea levels would rise by approximately 7 meters.

The ice sheet reflects back the vast majority of the sunlight falling on it. One result is that while the lower altitudes experience melt during the summer, the higher altitudes do not. Up until now, that is.

The Greenland Ice Sheet is Getting Darker

The worrying trend was signaled when NASA satellite information led the United States’ National Oceanic and Atmospheric Administration (NOAA) to publish an article entitled “The Greenland Ice Sheet Is Getting Darker.”  The article outlined the situation in these words…

“The bright white surface of the Greenland Ice Sheet reflects well over half of the sunlight that falls on it. In summer, this reflectiveness helps the ice sheet maintain itself: less absorbed sunlight means less heating and melting. In the past decade, however, satellite observations show a drop in Greenland’s reflectiveness. The darker surface absorbs more sunlight, accelerating melting.”

Here’s a graph, courtesy of www.meltfactor.org which shows the trend in the albedo (reflectivity) of the ice sheet at the highest altitudes. It shows a clear trend, over the period reviewed, of lowering reflectivity. The June 2012 figure is the worst summer figure for the 12 year period. OK, that still seems pretty academic information, until you consider where it may lead. To quote Dr. Jason Box, of Ohio State University, “darkening of the ice sheet in the 12 summers between 2000 and 2011 would have allowed the ice sheet to absorb an extra 172 quintillion joules of energy, nearly 2 times the annual energy consumption of the United States (about 94 quintillion joules in 2009). In areas where the ice sheet is melting, this additional energy has doubled melt rates, which contributes ice loss to the ocean and sea level rise. In non-melting areas, this extra energy would be enough to raise the temperature of a 5.5-inch-deep layer of snow from 14 degrees Fahrenheit (-10 Celsius) to the melting point.”

The evidence suggests that we are nearing, or may have reached, a critical tipping point. One where the melting of the Greenland ice sheet not only continues, but accelerates. The result would be more and more fresh water pouring into the North Atlantic. THAT, has very serious implications.

One of the principal drivers of today’s climate is the Ocean Conveyor. In a circulation pattern that covers the globe, water is warmed in the Southern hemisphere, and makes it’s way North as the Gulf Stream.  The warm Gulf Stream current brings warmth to North America and Europe. But as it heads North, it is giving up both heat and moisture, becoming cooler and saltier the further it goes. Finally, now comprised of heavier, saltier water, it sinks below the less salty water through which it is moving, and heads back South.

The Ocean Conveyor, through the Gulf Stream, warms North America and Europe.

According to the Woods Hole Oceanograhic Institution, “Fossil evidence clearly demonstrates that Earth’s climate can shift gears within a decade, establishing new and different patterns that can persist for decades to centuries. In addition, these climate shifts do not necessarily have universal, global effects. They can generate a counterintuitive scenario: Even as the earth as a whole continues to warm gradually, large regions may experience a precipitous and disruptive shift into colder climates.”

So here’s the nightmare scenario, particularly if you live in the Northeast United States, or in Europe.

It may sound like science fiction, but this scenario could become a horror story. The whole of humanity would be authors of this horror story, but special mention would have to go to certain media proprietors, special interest groups and the toadying politicians who pander to both of them. As usual, it will be the poor, the powerless and the dispossessed who will pay the price. Everything we do as individual to reduce our carbon footprint, is truly worthwhile.

To learn more about Abrupt Climate Change, click here. Please leave a Comment below- we welcome your feedback.