Juabar: Bringing Electricity to Eastern Africa through a Fleet of Solar Kiosks 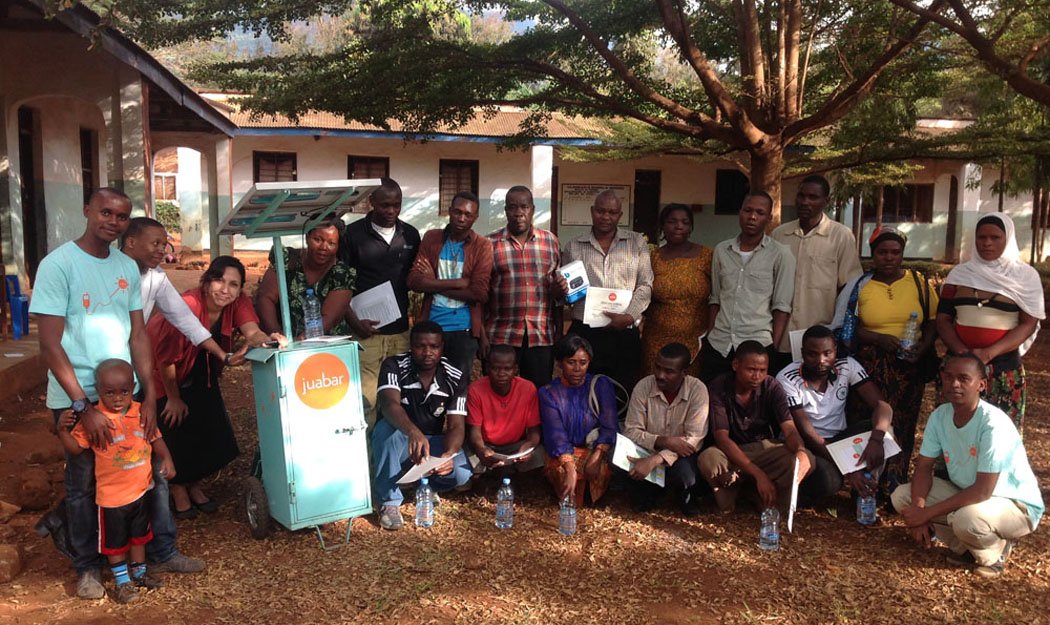 In recent years, the International Energy Agency (IEA) has estimated that 585 million people in sub-Saharan Africa lack access to electricity, with the electrification rate as low as 14.2% in rural areas.

Perhaps most pronounced is the situation in East Africa, with only 23% of Kenyans, 10.8% of Rwandans, and 14.8% of Tanzanians have access to electricity.

A number of companies and organisations on the continent have identified solar power as the solution. In an effort to mitigate this challenge, these “solar-preneurs” have emerged, trying to increase access to power, while simultaneously creating a revenue stream.

Juabar is one such startup, a design-build company that provides solar powered, mobile phone charging kiosks in Tanzania.

Deriving its name from Swahili, where “jua” translates to “sun”, these solar kiosks offer the ability to deliver much needed electricity to people that previously lacked access, specifically for charging mobile phones.

At a cost of roughly USD $600, Juabar kiosks are simple. They feature a 50W solar panel as the roof, 34Ah of 12 volt battery storage, and 20 DC outlets for phone charging.

The overall construction of the enclosure is extremely simple, and they are furnished with 2 bicycle wheels (looking a bit like an ice cream cart).

Perhaps even more intriguing than the product itself, is the opportunity that Juabar offers locals to partner in a franchise model. Each franchisee rents the equipment for a monthly fee, and then receives a share of the earnings. Franchisees earn between USD $75 and $150 a month, where the average monthly wage is just USD $45.

Juabar was founded in June of 2012, just outside San Francisco, CA, with the vision of empowering underserved communities to provide their own solar electrical solutions.

Co-founders Olivia Nava and Sachi DeCou knew there was opportunity in Eastern Africa, due to the number of underserved mobile phone users. Indeed, it can be hard to even find an outlet in many parts of Tanzania, where operations were focused.

They worked with California College of the Arts’ Center for Art and Public Life IMPACT Social Entrepreneurship program, and the Appropriate Rural Technology Institute to fund an initial prototype.

Along the way, they received substantial press and media coverage, including the likes of BBC, Fast Company, Xconomy, and others.

Here’s a quick look at some of their early milestones:

Unfortunately, as of early 2019, their website shared the news that they are no longer operational (no explanation given).

Lessons Learned from the Juabar Legacy

While it’s unclear why operations were ultimately discontinued, Juabar remains an incredible case study in technology, business, and social enterprise, particularly for entrepreneurs in frontier and emerging markets.

Here are some key takeaways:

Tech and Low Tech Are the Perfect Marriage

Importantly, Juabar didn’t spend thousands and thousands of dollars on space age kiosks with a lot of bells and whistles. They combined the critical piece of technology (solar PV) with low tech (bicycle tires and welded steel).

This allowed them to keep startup costs lower. It also was infinitely more practical in keeping the kiosks light enough to be mobile. It’s presumable that in developing countries, the more expensive and high dollar something is, the more of a potential liability it would be for theft and vandalism as well.

This same principle can be applied across many different areas of sound, environmentally-friendly living.

High tech innovations like energy-efficient appliances can be combined in homes with passive solar design, where building orientation alone can help optimize solar radiation for comfort. In-floor hydronic heating can be used in a home alongside uber low-tech rain water tanks.

Solar hot water is another prime example of this, where low-tech rooftop collectors can be coupled with a gas or electrical backup system, to ensure consistent hot water (heat pump hot water systems are another slightly higher tech example, but within the same vein).

Juabar also provides a compelling look at solutions where the end user, company, and middleman franchisee all benefitted.

It’s not enough for just the founders to come out ahead. Enduring businesses, and particularly those in lean markets, need to provide benefits to all sides of the business transaction.

Juabar cleverly accomplished this by motivating and empowering a workforce, at the same time that they brought a fantastic product to people that desperately needed it. Because of the franchise model that Juabar used, kiosk operators were able to earn significantly more than average wages in Tanzania. When your workforce is your biggest advocates, you know you have done something right.

Governments in many areas of the world have begun to embrace renewable energy technologies and the benefits they offer. We are seeing an increase in government tariffs and rebates offered, and even legislation mandating the use of clean energy.

Still, other countries, particularly in the developing world, lag behind in their endorsement and dedication to energy technologies like solar. In these cases, it falls upon the shoulders of visionary entrepreneurs and forward thinking end users to demonstrate the viability of renewable energy.

Rather than wait around for governments or NGOs to create a carefully paved path that’s lined with financial perks and other incentives, savvy entrepreneurs are blazing ahead, indeed creating the very case studies that slower organizations often need in place before adopting favorable policies.